I recently stepped into the miraculous error 0xc1900223 when doing an update on my Windows machine. Despite we are not having memory problems anymore, Windows still deals with mysterious and cryptic error codes instead of giving somehow understandable error messages. Well, that’s their philosophy and everyone is free to think their own part of it.

The error 0xc1900223appears when you I wanted to do a feature update and there was no useful advice from Microsoft. 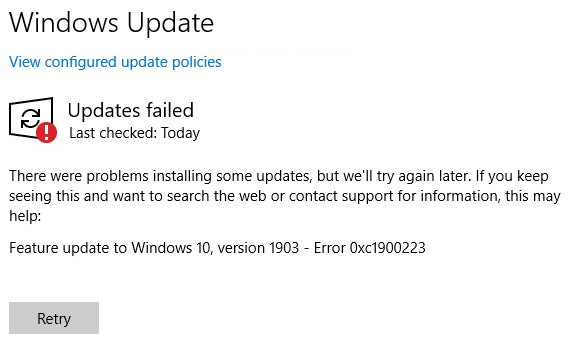 Windows Update is unable to download the required files and assumes something is wrong on the remote end.

Are you using PiHole or a custom hosts file to block certain requests? That could be the issue. The later was the reason in my case

I used a custom hosts file for privacy reasons (block unwanted telemetry to Microsoft) and apparently one of the domains was needed for the feature update. Remove your hosts file and replace it by a empty one resolved the issue for me

The host file is located in C:\Windows\System32\drivers\etc\hosts. Rename/Remove it and create an empty file instead.

After modifying this file you will also need to flush the DNS cache:

Now it’s updating, after that I’m setting the host file again, and we’re good to go.

Using Pi-Hole is in general a good idea. However, if you are greedily blocking Microsoft domains could lead to the error. Unblock the Windows computer for the update could fix your issue.