In this blog post I’m gonna tell you about a possible upgrade of my home lab system to a Ryzen-based mini-ITX board, which holds much potential for an affordable, yet powerful home lab.

I recently stumbled across the ASRock Rack X570D4I-2T, which looks like a really cool mITX server board for a AMD Ryzen processor (5000 Series). The mainboard looks like a decent server board for a home lab, it supports AMD Ryzen Desktop processors (which are affordable), DDR4 memort, two M.2 Slot and 8 SATA3 ports (OCulink). Integrated IPMI qualifies it as a real server, as remote management becomes possible. The mainboard goes for about 400 euros at the time of writing, which in my opinion is ok for a decent server board for modern processors.

Cave: Based on some random reviewers on the internet, the IPMI support is not working too well. It sounds ok for me, as the only thing that I want to do via IPMI is to do a power cycle if necessary, and everything else I’d do in person. Also, placing the memory so close to the CPU socket means you need to make sure the cooling is not low-end, otherwise your performance might suffer.

A selection of Ryzen processors

Let’s go to the core of the (possible new server). Here I made a selection of possible Ryzen processors, which should work with this board:

Since my original inspiration is to setup my own virtualization lab, I’d go for the 5600X. 6 cores should be enough power for what I want to do with it, it won’t be a very strong build server but enough to keep a bunch of VMs running. It is affordable in buying, and with 65W also not too heavy on the power bill either.

The numbers, Mason! What do they mean?

So, let’s work this out.

For compleness of this system upgrade, a new set of DDR4 RAM (32 GB, ECC) is counted in at roughly 200 bucks.

So, assuming we want to have a decent system with a Ryzen 5600X, we would spend in total ~ 870 euros for mainboard, CPU and RAM. Another 130 euros for a new NVME disk and we end up at roughly 1000 euros. That sounds like a decent, but doable amount of money for an upgrade. 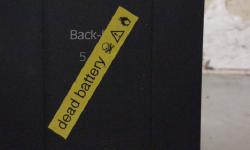 The tragic death of our UPS