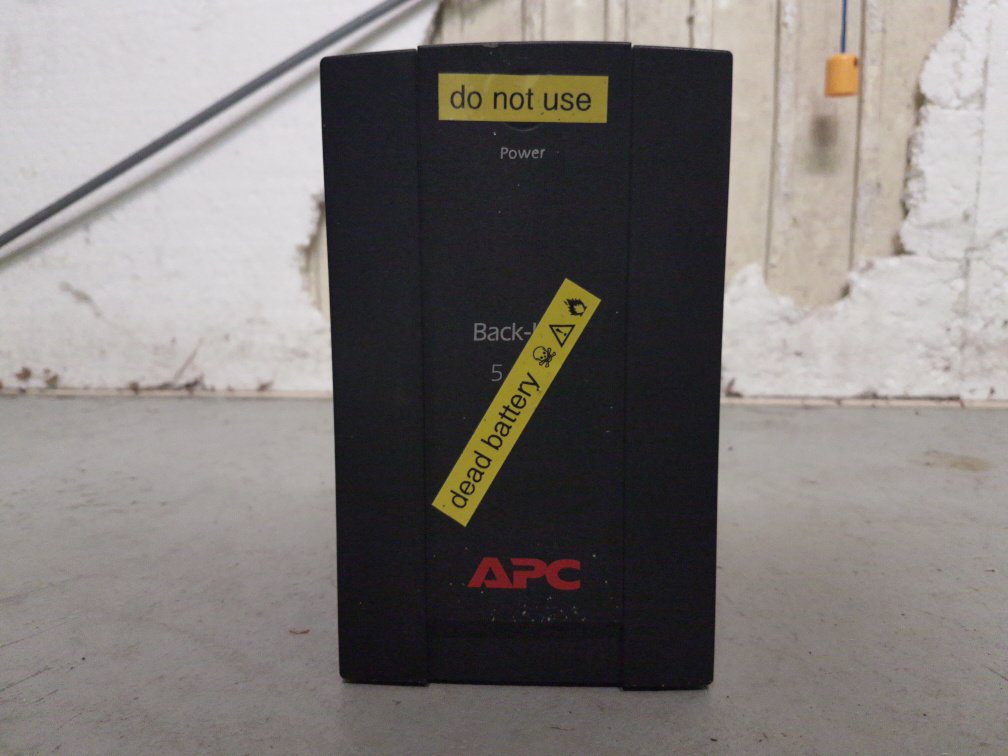 More specifically, the battery is dead. This device is over 7 years old and was powering our home server/NAS for those 7 years almost non-stop. It did a good service, was reliable and prevented a handful hard power-cuts for our NAS due to occasional power outages.

Random beeping in the night

The first time I noticed something weird was going on, was when it was starting to randomly beep during the night. Presumably this was during a self-test, where the system noticed, that the battery is not good anymore. It stopped beeping and went back to normal. All systems were operational, but since this is an old one without any USB connection I could only check the LED light. Since it was green, I assumed a random hickup but wanted to run a self-test in the morning.

So, after my first coffee I went to my office room and hit the power button for a long press. I hear the typical click and immediately after the NAS goes black. Power-cut. Shit. Also, the NAS goes into some kind of zombie mode, the LED flickers weakly and it does not respond to anything anymore. Weird notices arise. When I start to notice a very mild smell of warm electronics, I go into a panic mode and immediately disconnect the UPS. Of course, it’s a UPS, so just removing the power input does not change anything. I bring it to the garage and want to remove the battery connector. The battery connector is super slippery, the LED keeps flickering and the weird noises are still there. I try another time without any success. This is the time, when I see no other option but to use my good old (TM) Leatherman forceps, a thing one should never ever do. But it’s a frakking UPS and it’s behaving weird and I don’t want our house to burn down. So, screw it, this connector is gonna go. But the forceps is too pinted to actually grab anything. While the noises and the flickering and the weird smell continues I cannot grab that damn connector. Apparently noone ever thought about someone that wants to cut the circuit to prevent some damage. But, because I’m in the garage, I can get another forceps, which is better suited. But even with this one, I slip of. I cannot grab it. Stupid UPS. I’m thinking of putting it outside the house and then bring it to the recycling center. But I don’t want to bring it there in this state - nothing is working. Pushing the power button does not respond, the curcuit breaker at the back does nothing and I’m running out of options. So, one last try with the forceps. Frak. I don’t care anymore, if you break you break. Gnaaarrggghhhh, and success! It worked! I got the supid battery connector out, the noises stop and the LED is gone as well. Pew. 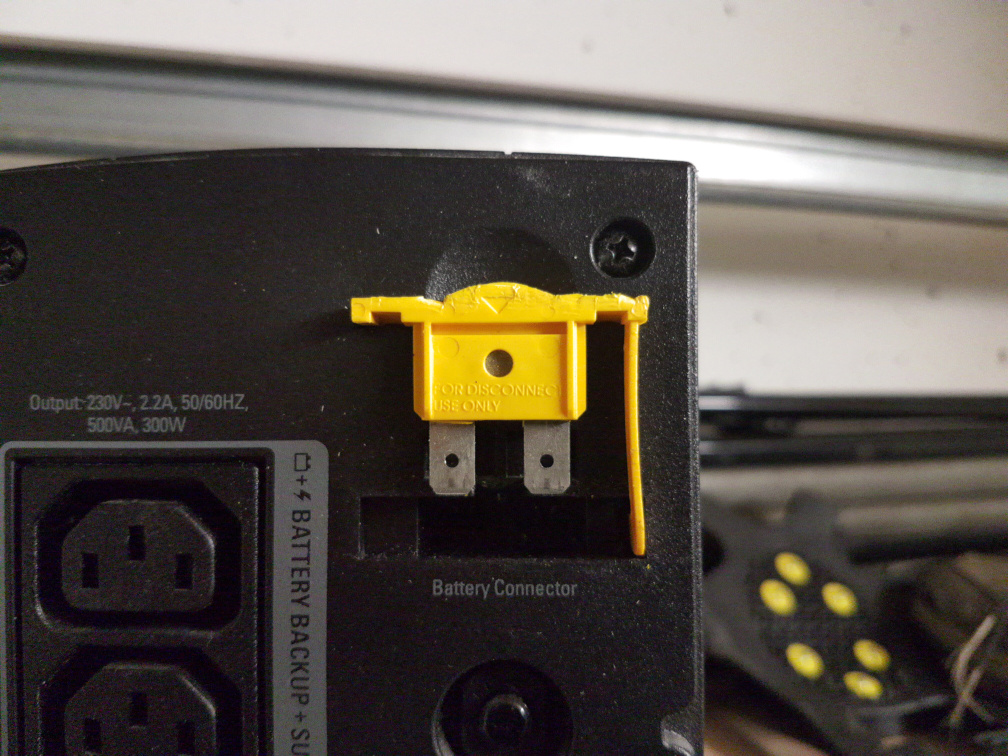 So, the connector is visibly damaged and no chance to put that back in there. At this point I’m gonna replace it with a new one, which has also a USB PowerChute cable, so I can prevent such a sudden death and get the readings out of the device.

The situation that the battery connector was so hard to remove is something that I didn’t though about before but I will have to come up with a solution to prevent this from happening again. That was a very unpleasant experience that I don’t intent to repeat.

The NAS is currently on the normal power and runs without any issues and I ordered another APC (Back-UPS 1400 - the bigger one with USB cable), because apart from this “little incident” it was a good and reliable device.