Another weekend, another bread.

This time I was trying myself on a very simple sourdough recipe, for a tasty bread without any yeast

The recipe is really simple, and split into two parts: The sourdough and the actual bread:

I fed an took care of the sourdough started for about 4 days, until it was active enough to get to the bread. Then take out 10g and mix all ingredients together. Let them stand for about 12-16h at 25 degree. 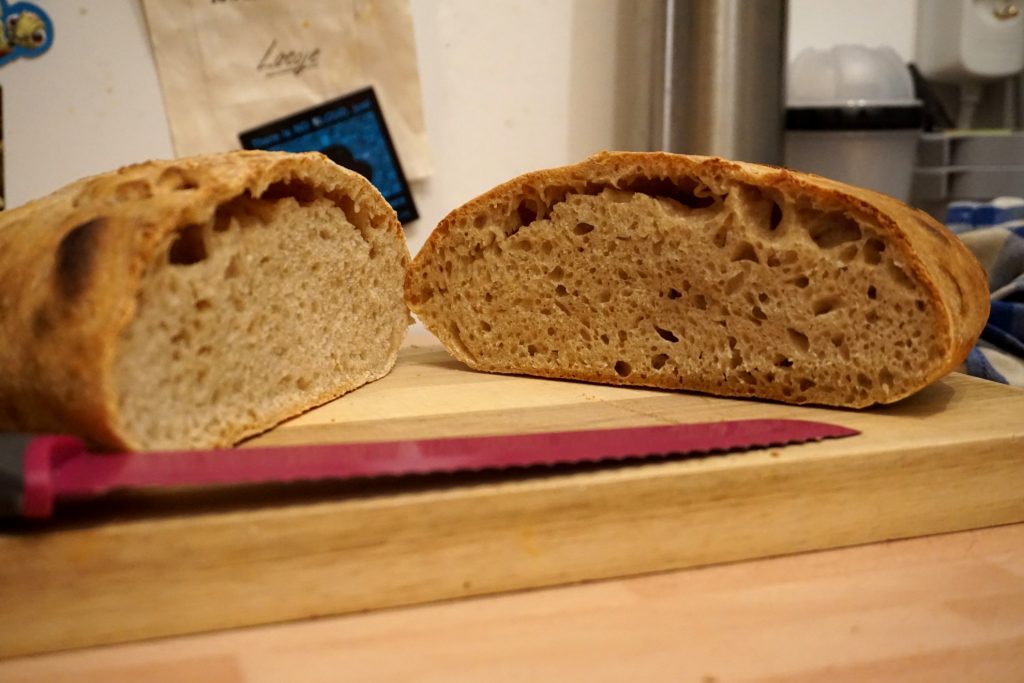 The result. The form is not so round because it was to gluey for the bread form, resulting in half of the bread sticking there and consecutively ending up in the sink 🙁

Initially I declared the other half on the baking tray as failure, but because the oven was hot and I wanted to try the taste I was anyways going to bake it. Turns out, that the bread was kind-of self-healing. Lesson learned: Bread can excuse small (and big) mistakes pretty well. At least this one 🙂

The inner part of the bread has very nice pores and tastes fluffy. Pretty much impressive for a bread without any baker’s yeast! Nature gives you all you need, you only have to know how to use it. And it takes it’s time. You can’t hurry a good bread.

Taste-wise I am a bit disappointment. The bread has many aroma, especially in the crust, but the interior is a bit too sour. The reason is probably, that the sourdough started had too many sour-bacteria and too less yeast cultures, but something that I can make better the next time by selectively feeding the yeasts before starting the sourdough (so called “Hefeführung”). And let the bread-dough stand for not so long, not even to peak height.

Well, it was a try, and for now I am happy with the result. Especially after I wanted already to declare it failed after half of the dough sticking to the bread basket.

And for now: Happy baking!