Today I experimented a bit with the hydration levels of two different flour types: Classical wheat flour (Tarwebloem) and spelt flour. I did a measurement series with 65%, 70%, 75%, 80% and 85% for wheat and 65%, 75% and 85% for spelt flour to determine the properties of the dough after autolysis. I figured that for the breads that I usually bake, a hydration level between 65% and 75% is optimal for wheat flour. For spelt I am still a bit uncertain, but I get the feeling that 75% might be already too high for a good gluten structure to form.

Easy zone (not too much sticky)

Baker’s percentages (or baker’s math) is in a nutshell the percentage of a single igrediant per flour weight:

This formula is often used to quickly scale recipe ingredients. If you have a recipe, you can easily scale the ingreadients up or down, or modify the hydration level.

If you have multiple flour types, m(flour_total) is the sum of all different flour types.

Find out more about the baker’s percentage on theperfectloaf.com.

Because every flour behaves a little bit differently, I like to try out a series of hydration levels before making bread. After some time one gets a feeling how the dough for a recipe should look like and behave. To achieve this goal, one might need to adjust the water content a little bit, as the same flour type sometimes gives a bit siffer or softer result with the same amount of water.

To learn how my flour behaves, I did a measurement series with wheat and spelt flour.

For wheat, I did 65%, 70%, 75%, 80% and 85% hydration levels. For each of those levels, I put 40g of flour in a small bowl, together with the corresponding amount of water, mix it throughly and let it stand for at least half an hour to let it soak (autolysis). After that, I did the gluten window test and made a picture for future reference. The gluten window tells us, how good the protein network if and this determines, how good the bread will behave. A good gluten network is essential for a soft and fluffy interior to form and to hold.

For spelt I did the same, but just with 65%, 75% and 85% hydration. Here I am still basically experimenting on a coarse level, as I have not mastered this flour type to the point, where I believe that a finer level gives me any advantage. 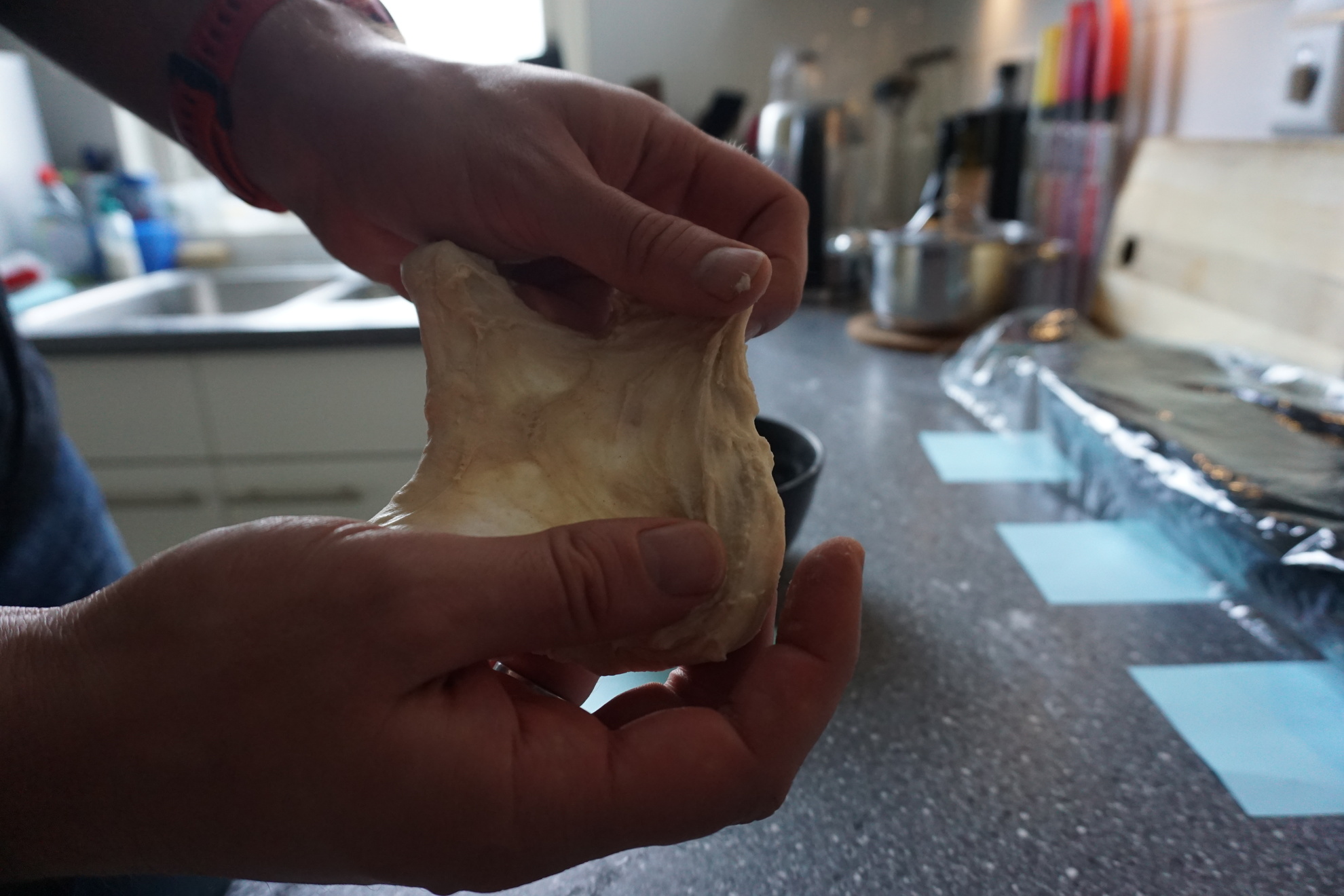 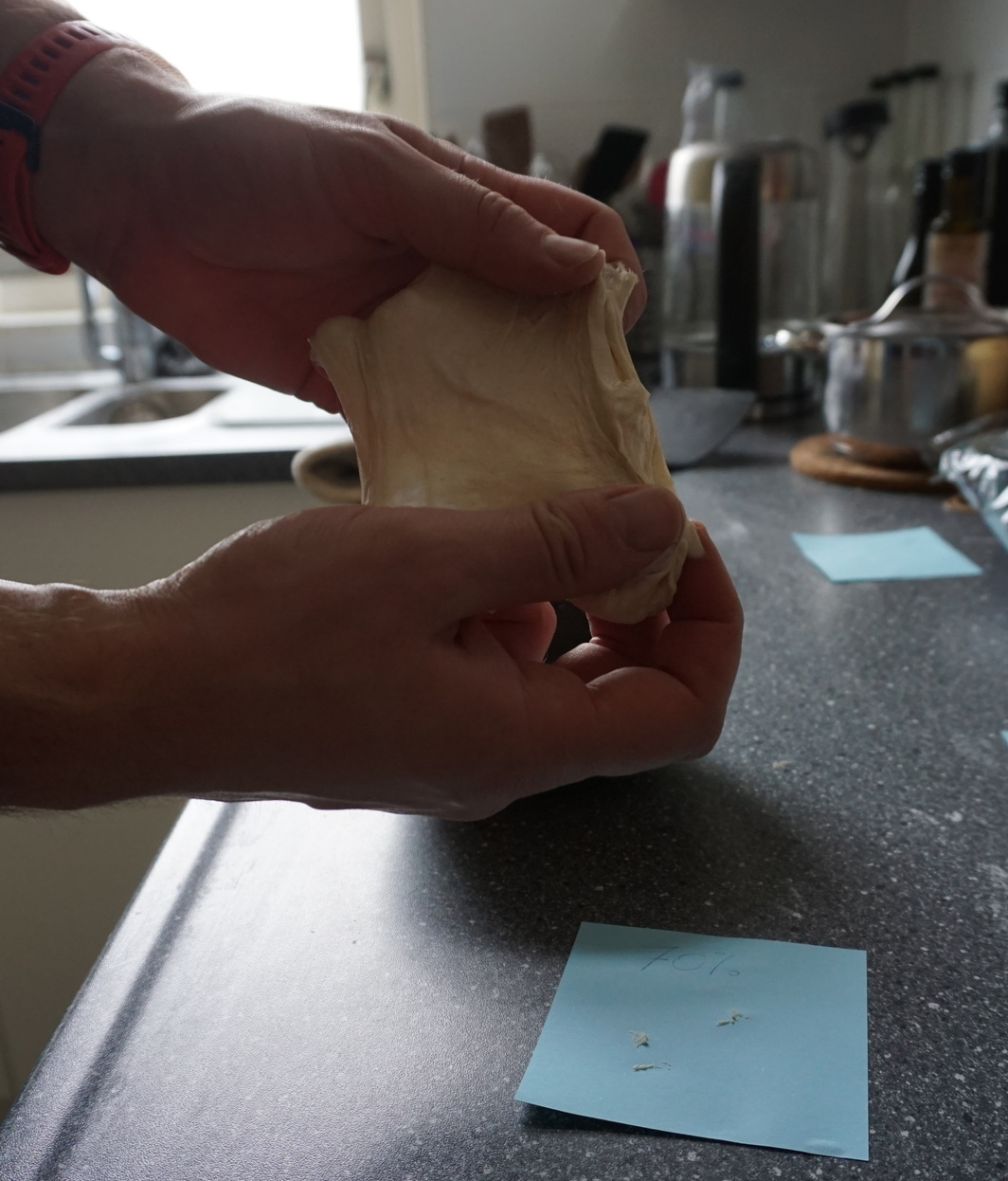 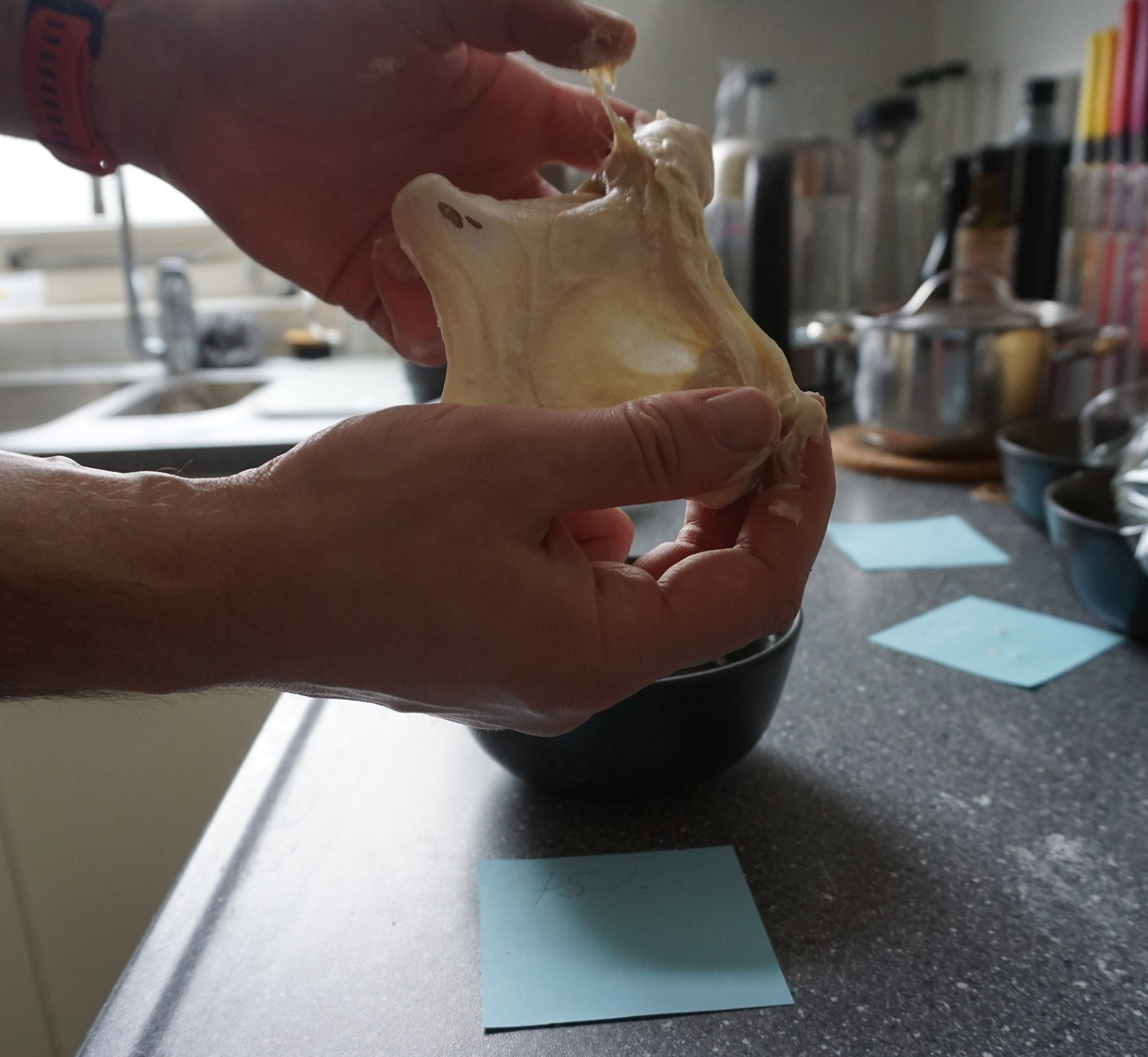 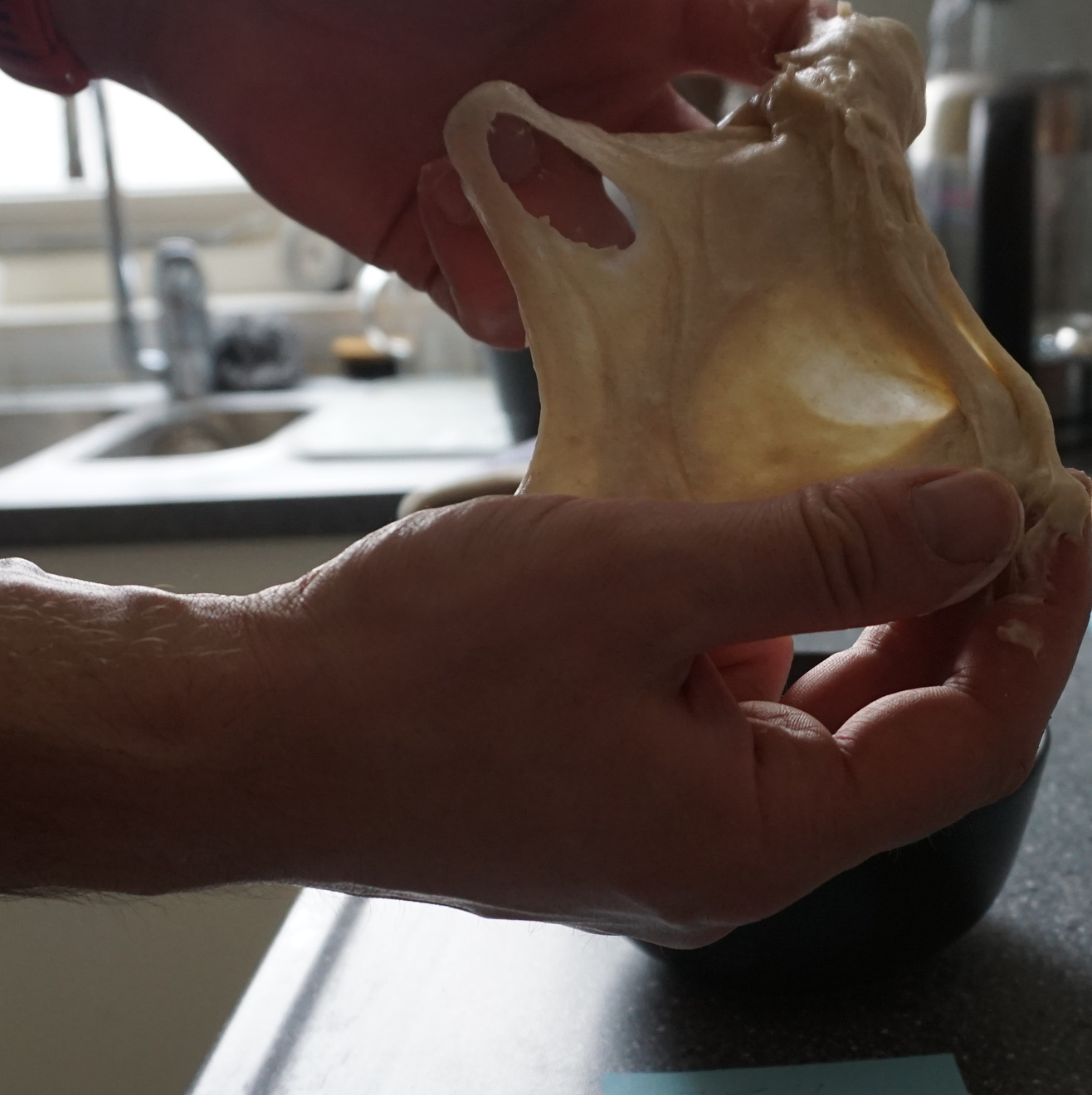 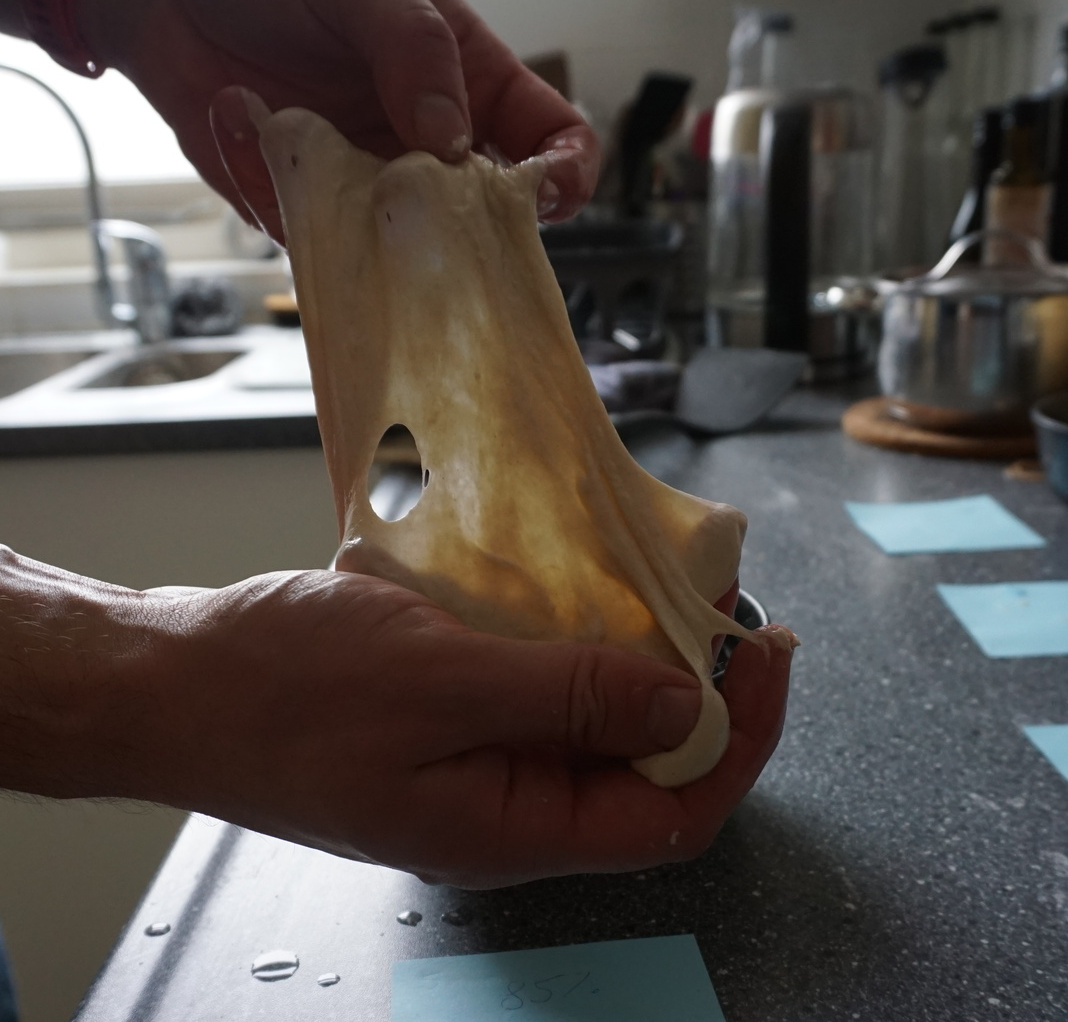 First: Every hydration level here should in principle work. The only problematic one could be 85%, where the dough slowly starts to tear apart. So, for my wheat flour I believe anything between 65% and 75% is fine from the perspective of the gluten network.

From the perspective of the dough viscosity, I tend to go to lower hydration amounts. 65% is already a bit gooy, and it only becomes messier towards higher hydration levels. Perhaps I need to read up about different folding techniques, but right now I’m very afraid that any shape would just liquidify and ultimately turn into a pancake, rather than a bread. 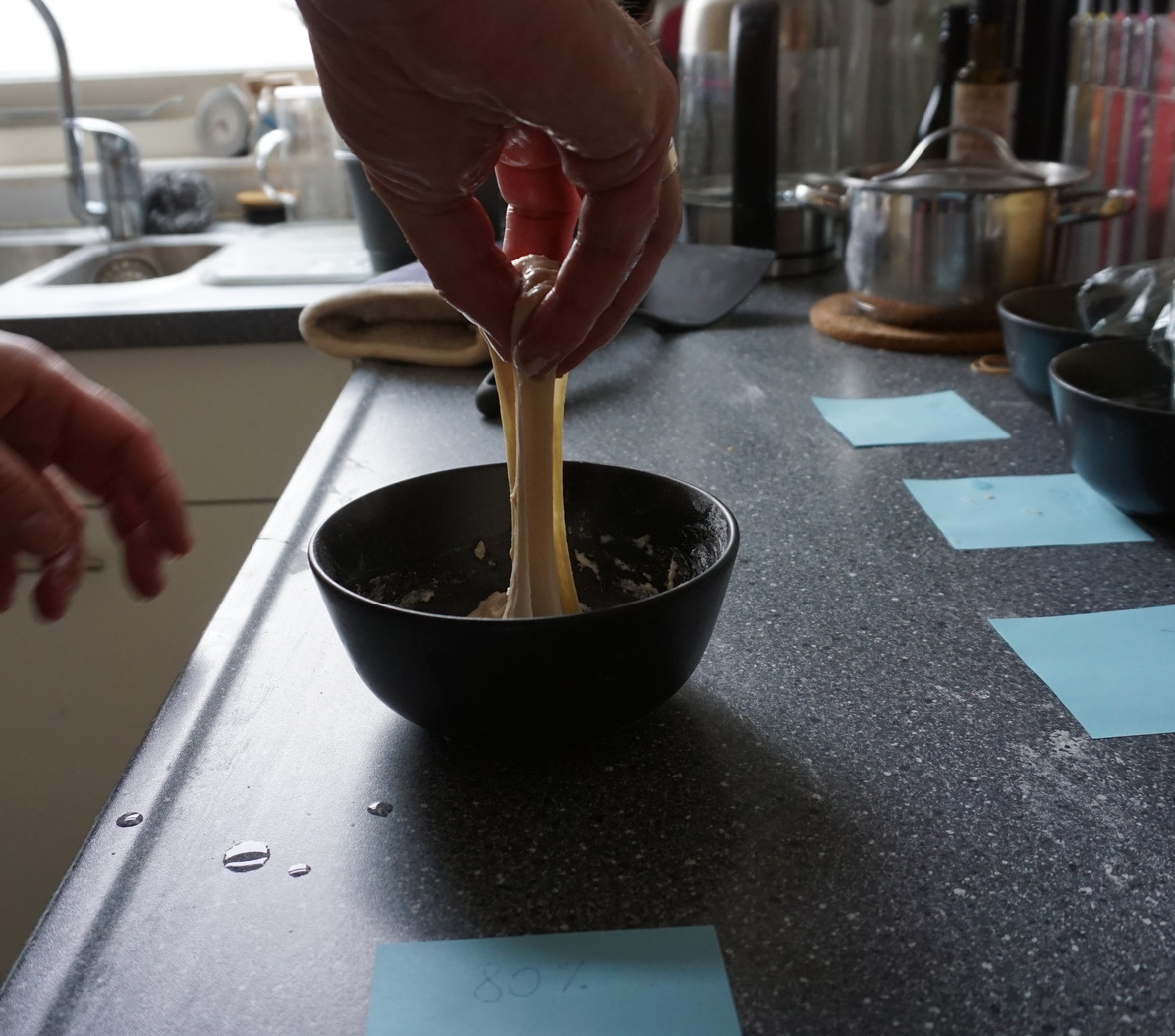 Spelt flour behaves slightly different than wheat flour. I find it interesting, because I feel that the taste is a bit more hearty and I believe it is easier on your gut, but both can be just a subjective feeling caused by brainwashing of enough people around me by a generation of health food shop owners so that I started to believe it at some point as well. Anyways … :-)

For spelt flour I was less thoroughly in the number of measurements. Here I only wanted get a rough first impression, but also look a bit more into the consistency/viscosity properties of the dough. If possible also find a relation between wheat hydration and spelt hydration levels that allow me to understand the behaviour of spelt dough a bit better. 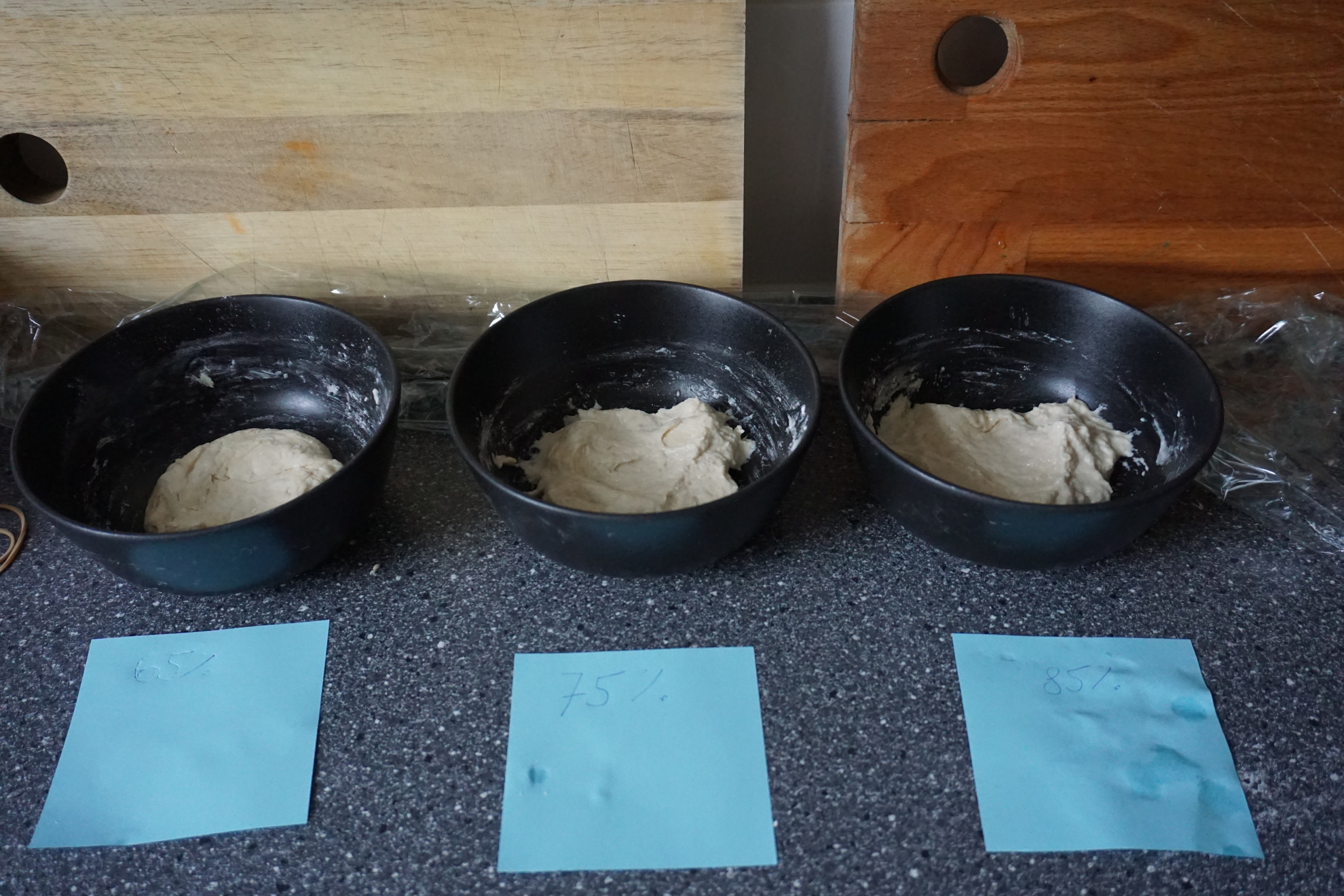 Now let’s compare this series with the wheat flour 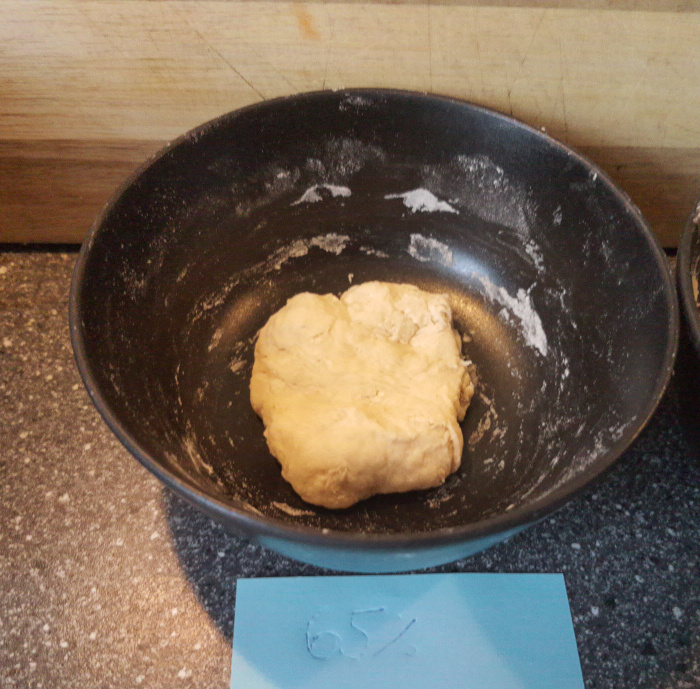 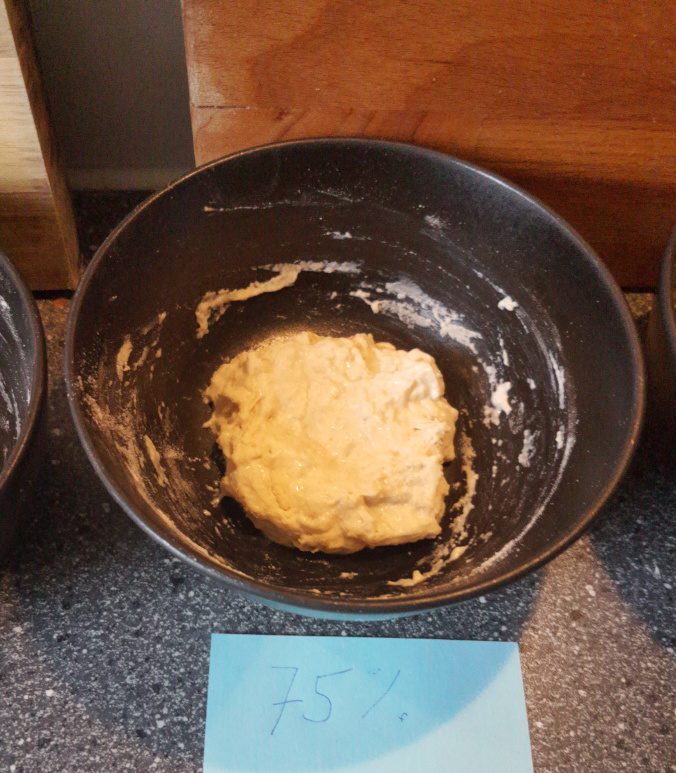 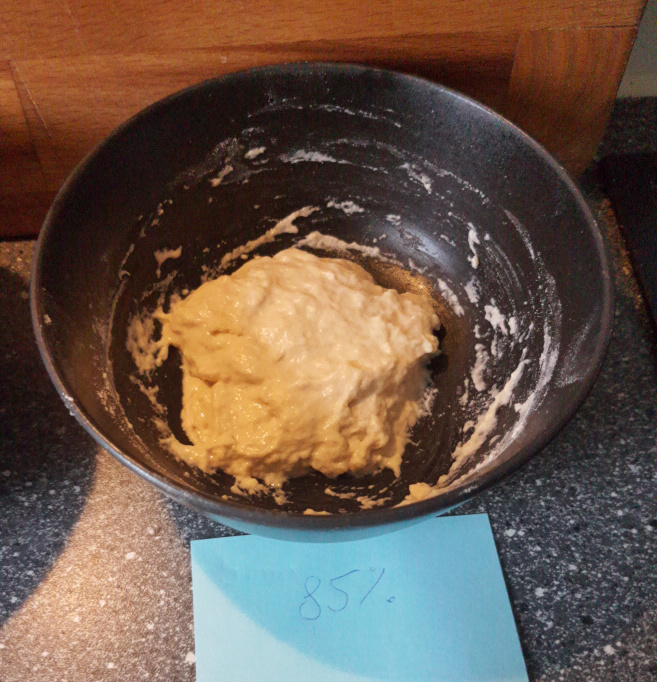 Note: The pictures are misleading, as I spread out the spelt flour dough more than the wheat flour dough. What I write is based on how the dough feels, as opposed to how the pictures look. Don’t get confused/mislead by the pictures!

Let’s have a look also at how the consistency of the spelt dough looks at different hydration levels: 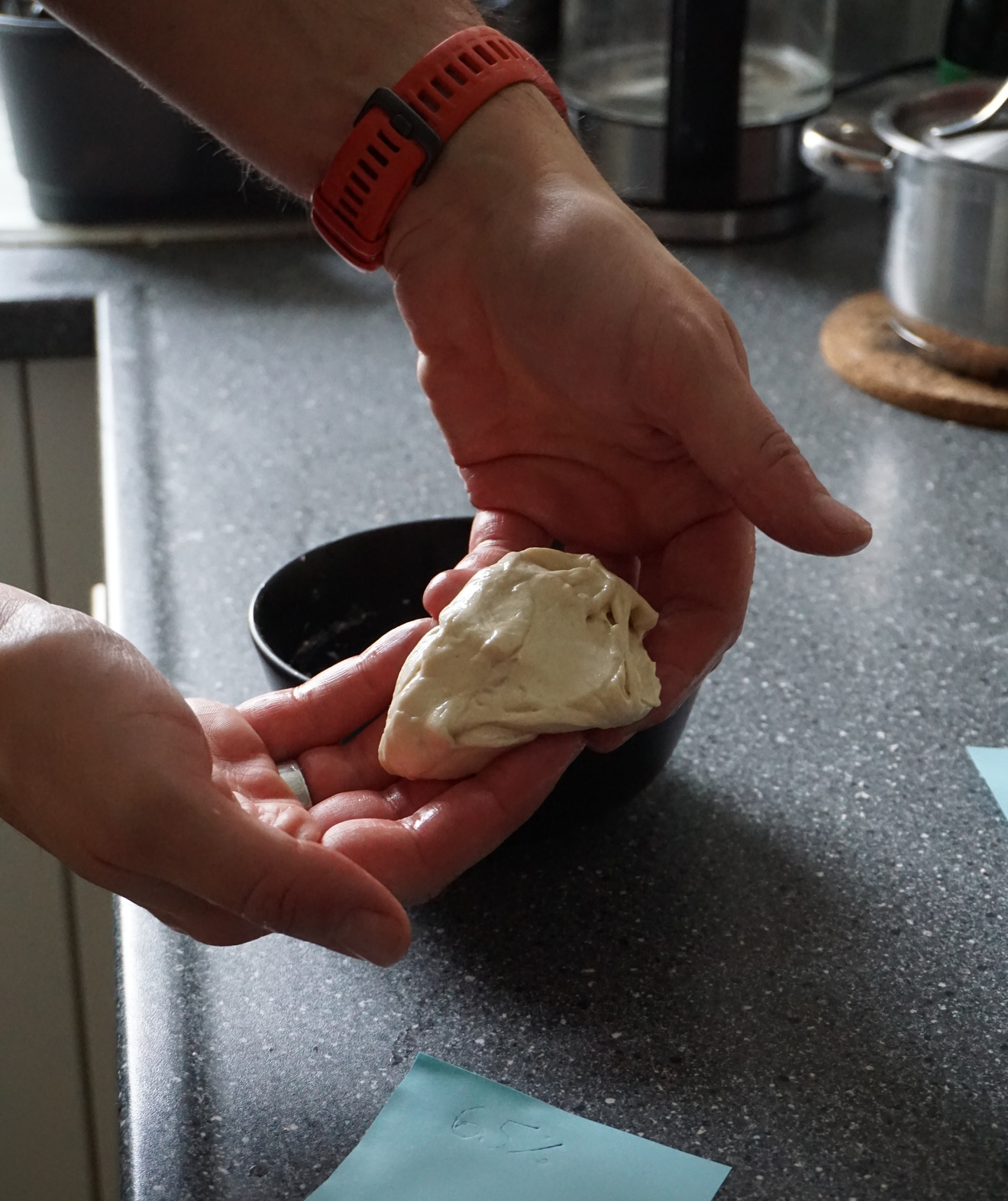 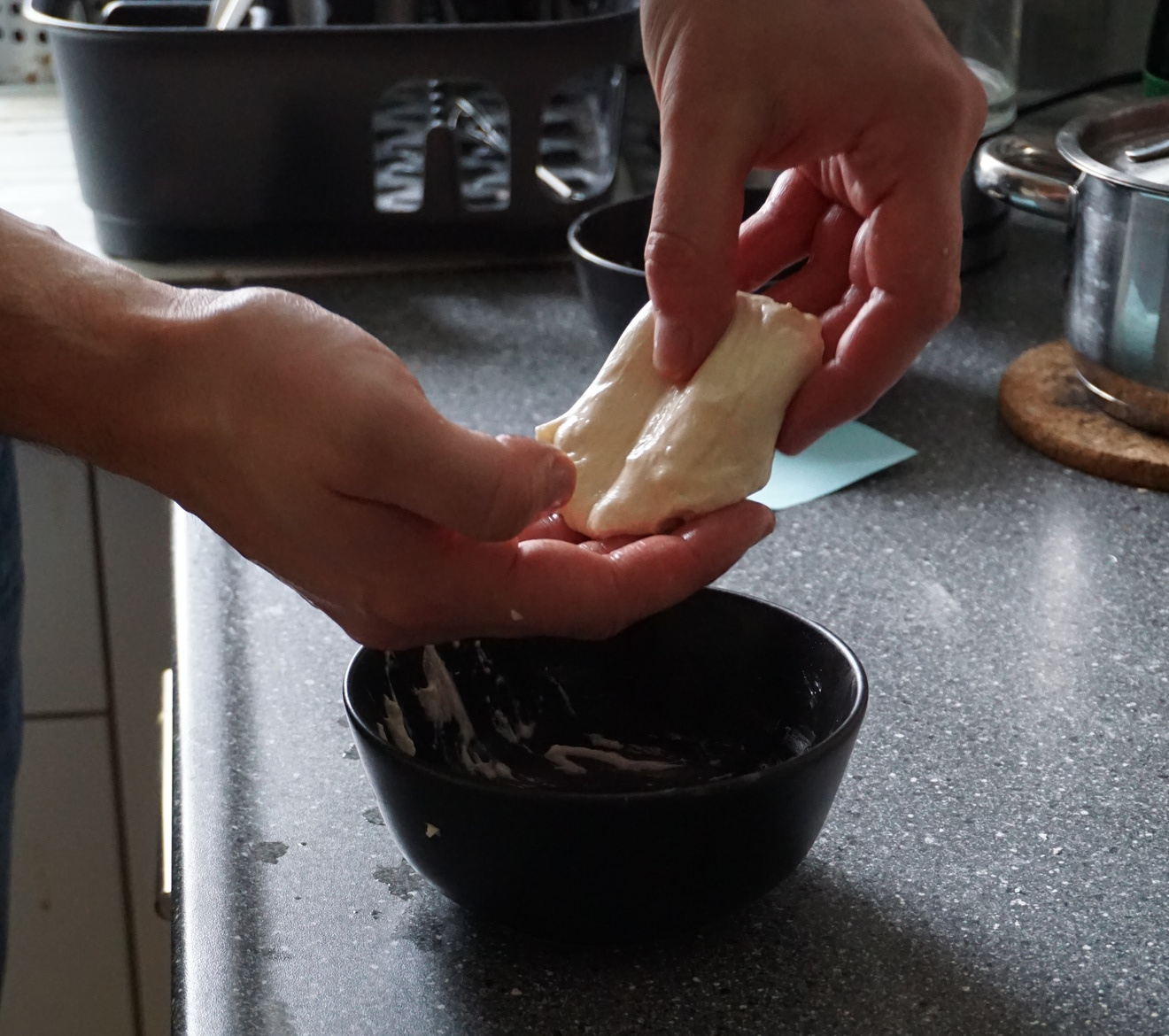 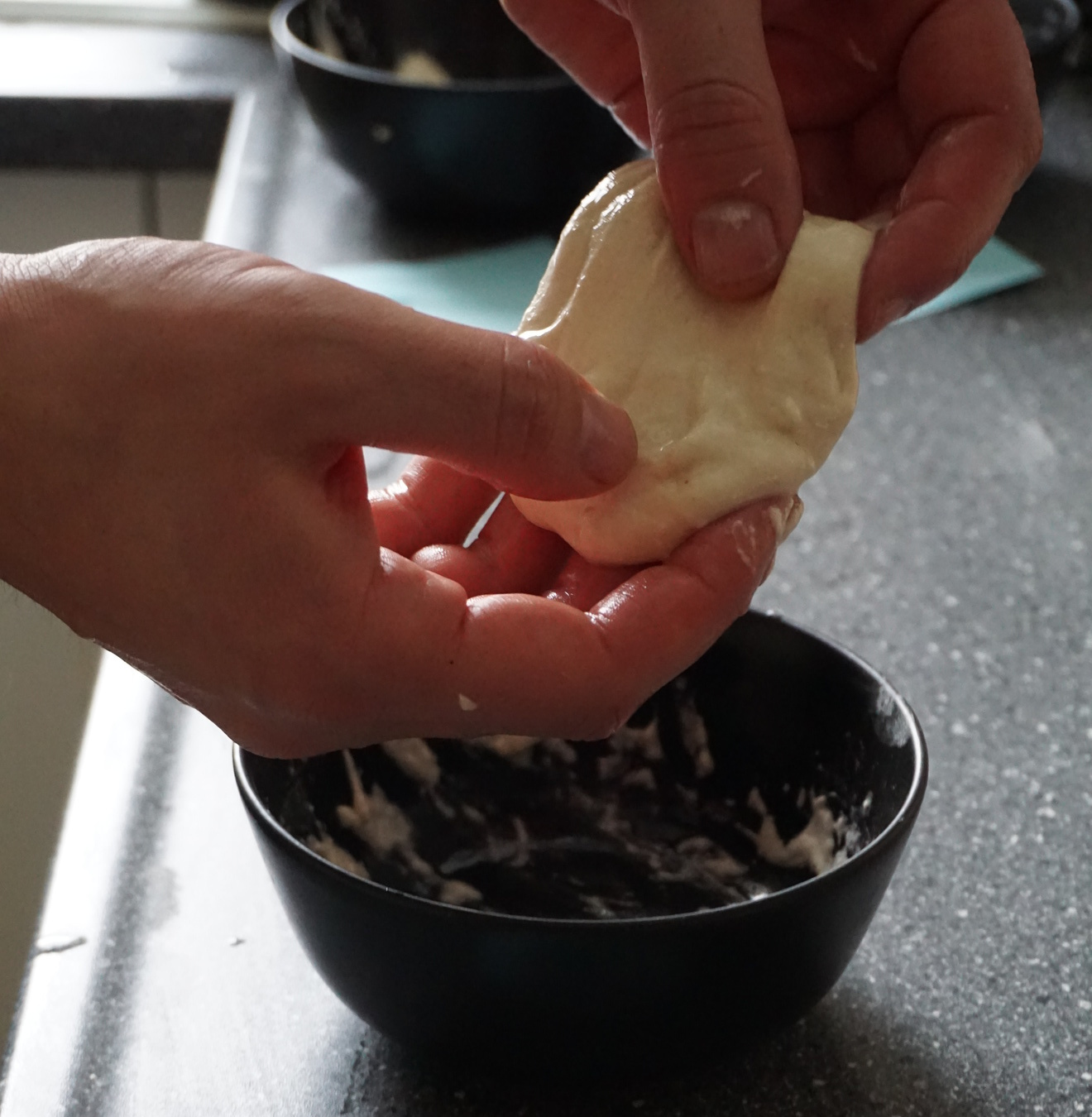 All of them are very sticky, and one needs to water the hands properly to avoid the dough stick to your fingers constantly.

Gluten Window for the spelt flour

Similar to the wheat flour, I did a measurement series with 65%, 75% and 85% hydration levels also for spelt flour. 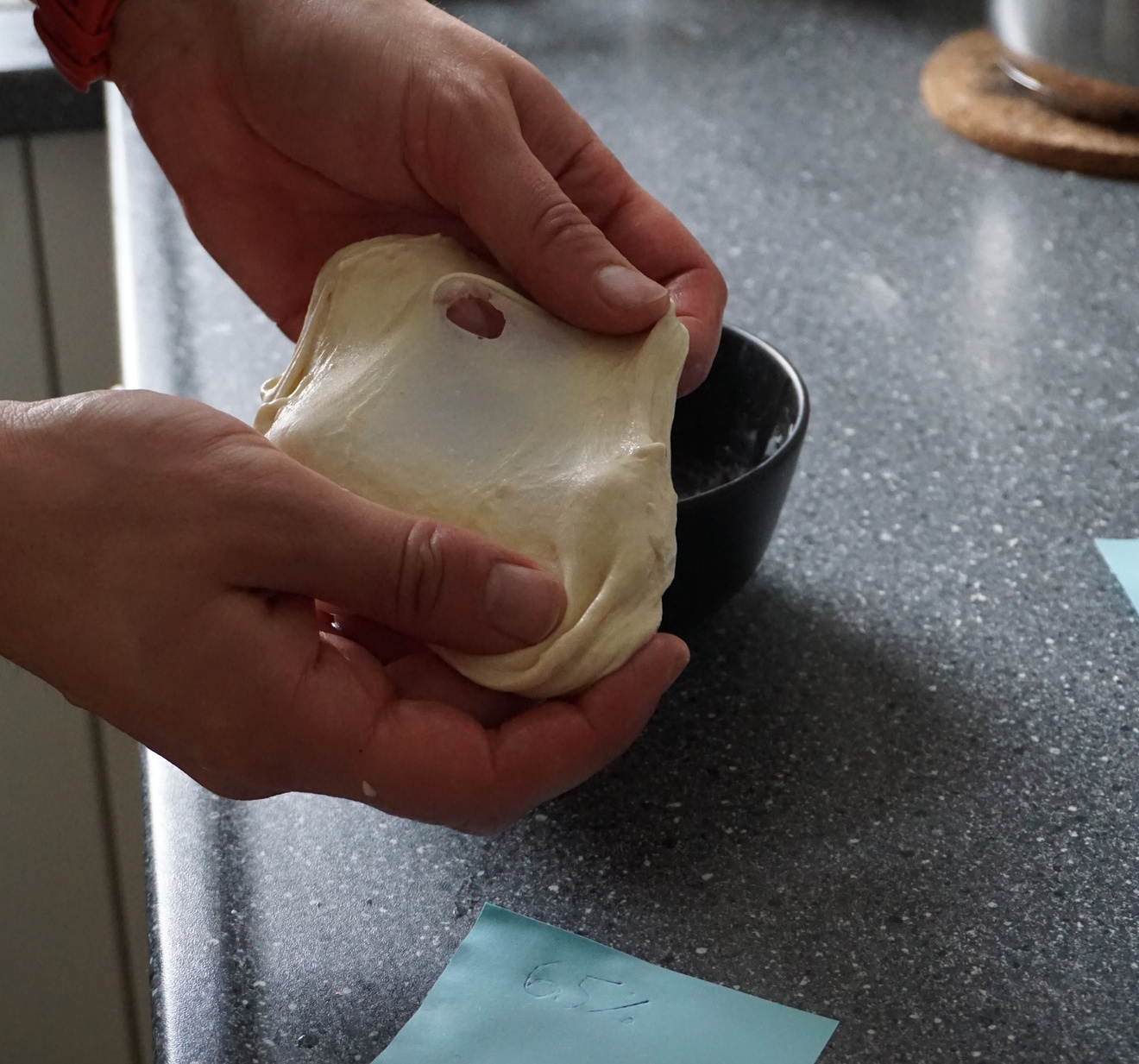 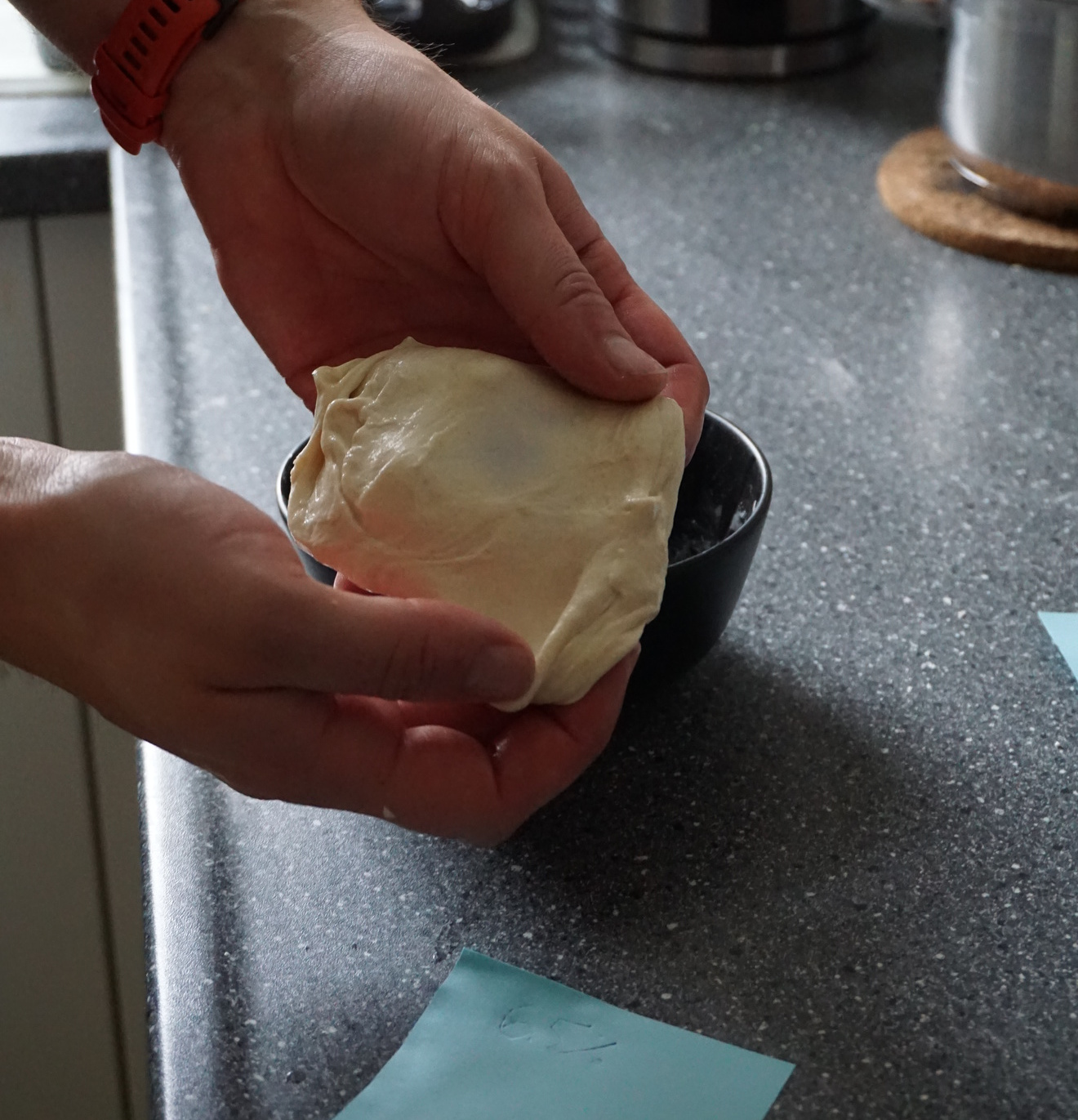 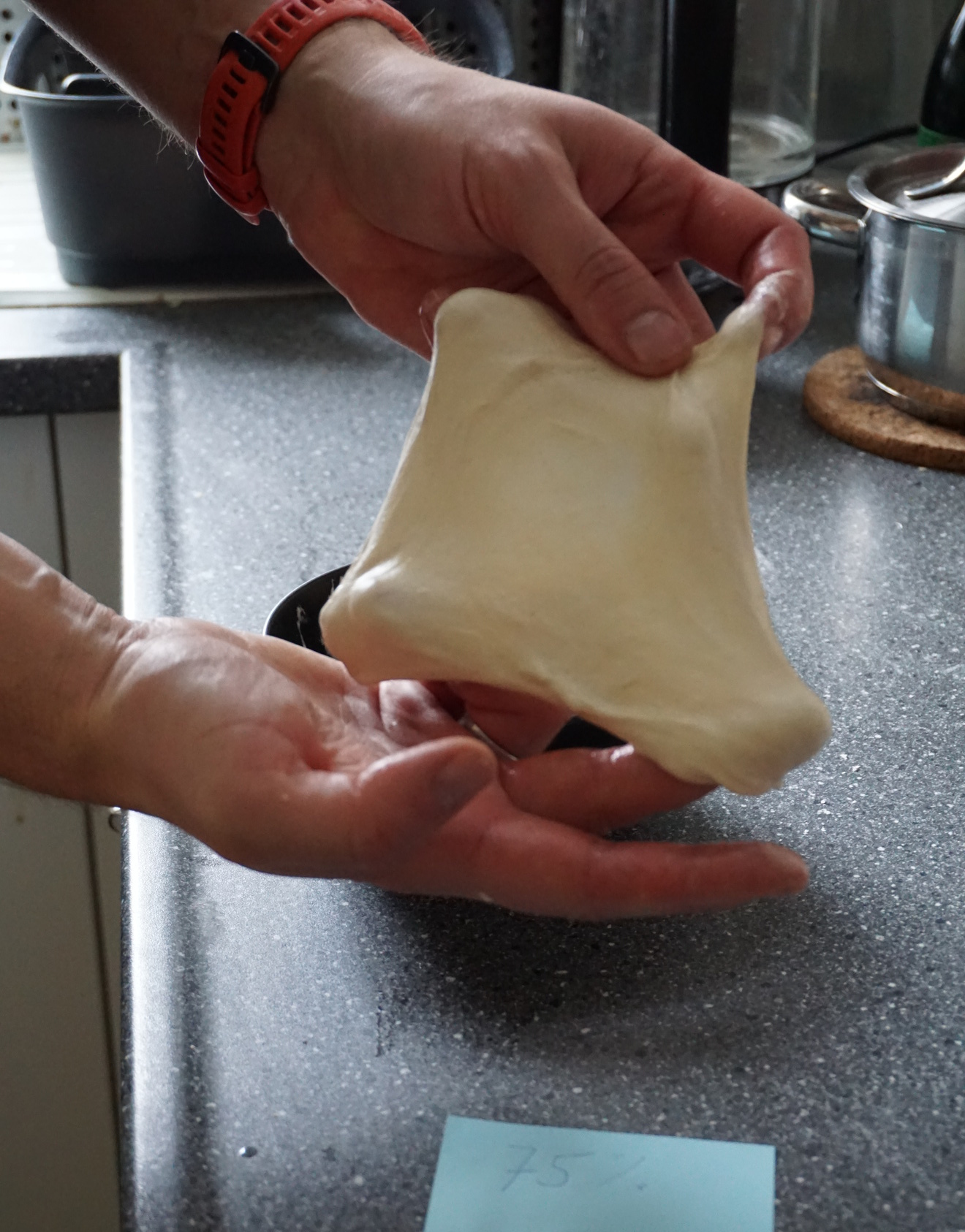 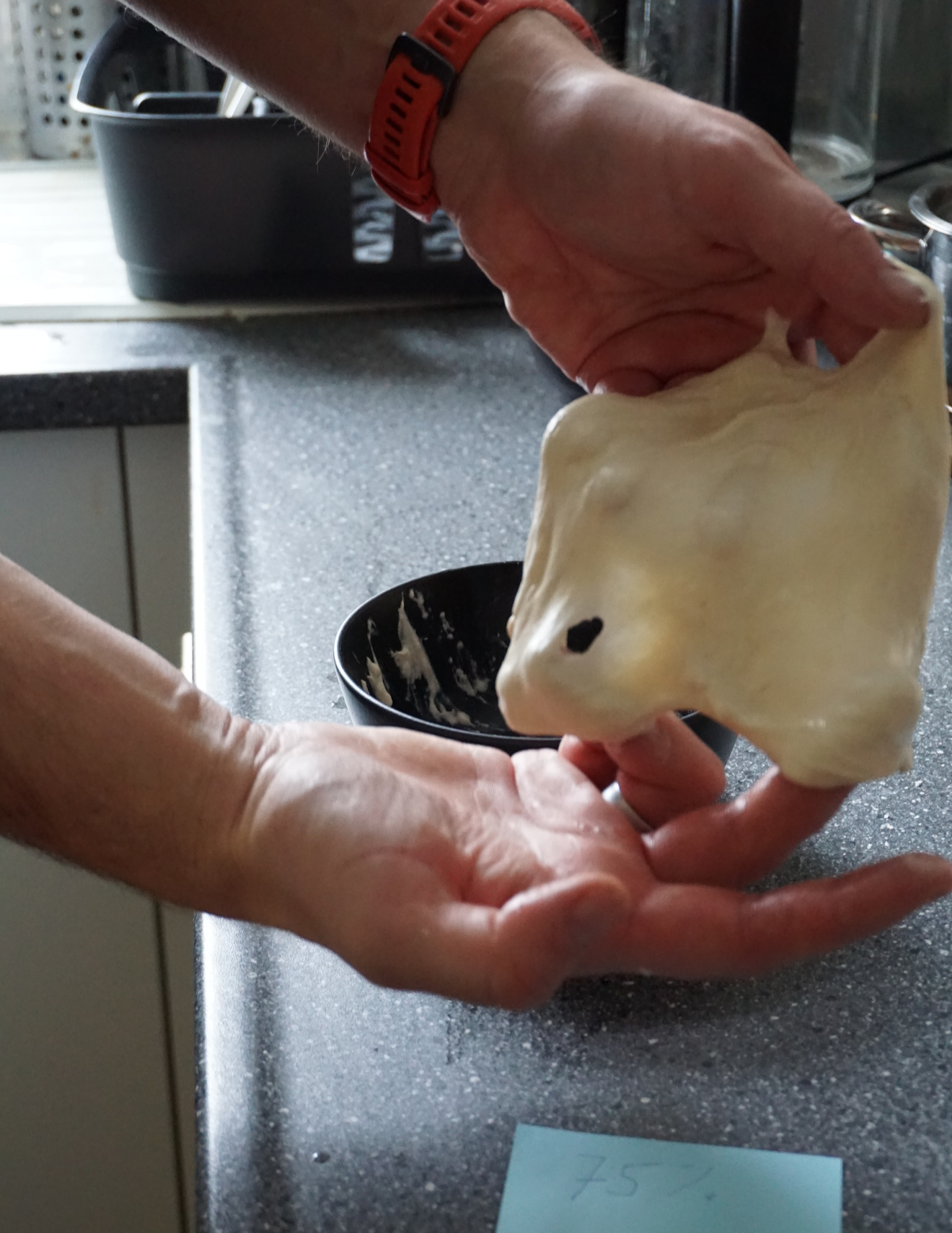 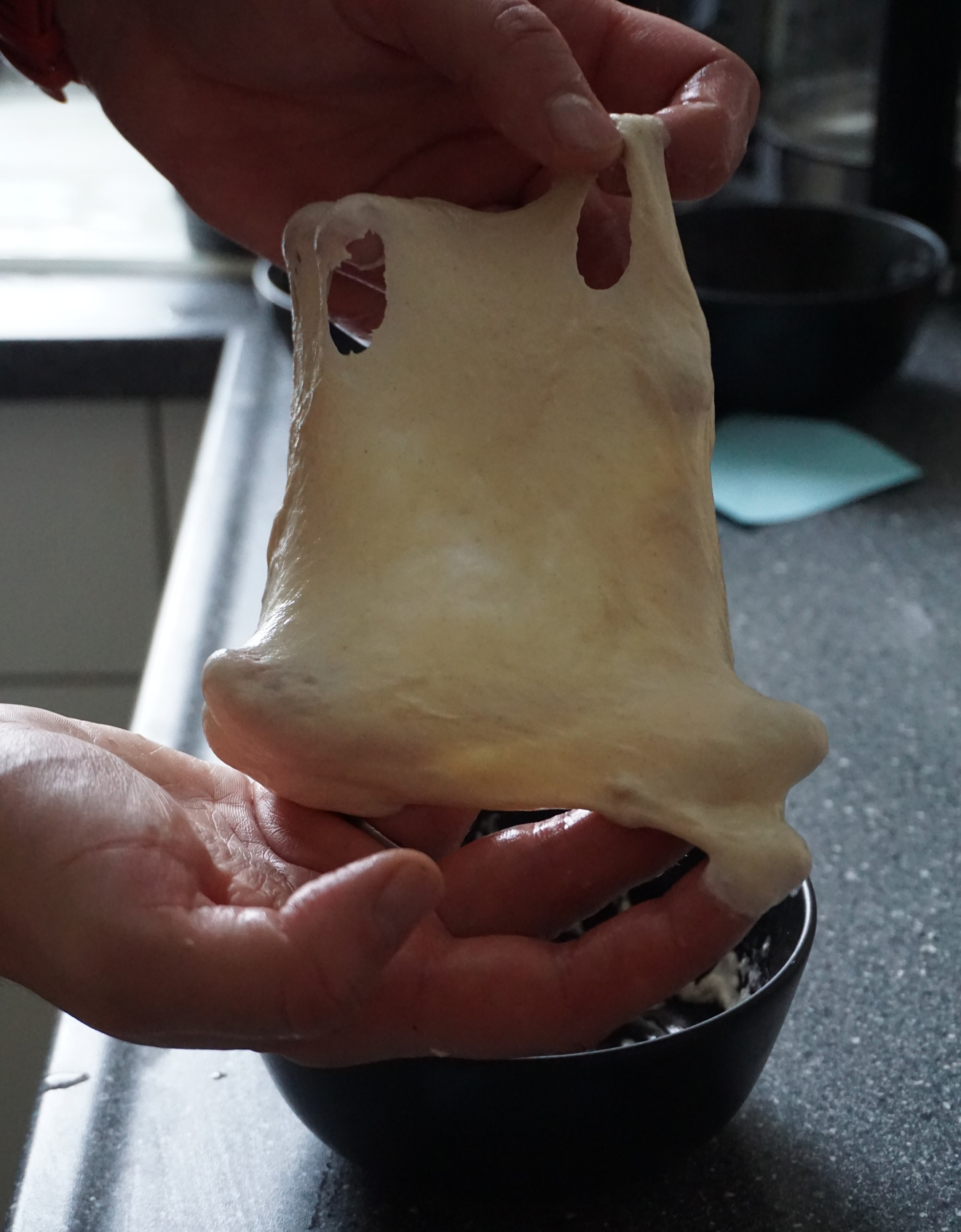 Here I am in dubio. I believe that 65% and 75% are ok, although at 75% the gluten window already starts to somehow tear apart. At least more than compared to the wheat counterpart. 85% for this alone might be already too much, although I could form the gluten window and it was only tearing apart in the last bit. I might still work, but I can clearly see that the gluten window of wheat flour at 85% hydration levels is stronger than with spelt flour. This is a bit sad, because I have the feeling that spelt is easier to deal with at such high hydration levels :-) 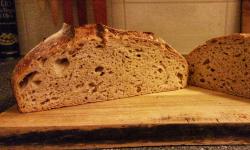